There is a mental model called inversion.

According to inversion, when we face a daunting conundrum, the most pertinent course of action is to think backwards. Namely, by going back to the fundamentals of the issue and trying to deconstruct its main constituents, we end up increasing the chances of solving it. Or at least decreasing the chances of allowing it to inflict misery upon us.

Inversion, despite its very useful nature, is an arcane term for most people.

Most people ignore inversion and they do so in a very irresponsible fashion.

They firmly believe that the best way to solve a problem is just by capitalizing on conventional wisdom and preconceived notions. They cling to safe patterns that they feel accustomed to and they repeat these patterns perpetually without questioning or without the willingness to test something more innovative.

The origins of this behavior are multifarious.

For starters, we have the path of least resistance. This specific dictum has its origins in physics where it is used as a heuristic that describes the approximation of the tendency to the least energy state. In colloquial language, we use it to allude to the proclivity of humans to avoid personal effort or confrontation.

Then we have the notions of ego and identity. When a person is faced with a situation that challenges the essence of their identity, that is the substrate of their belief system, the mere thought of changing this belief system convulses the core of their being. We notice that especially with older people who usually showcase extreme resistance towards novelty or towards the adoption of new trends and ideologies.

Finally, we need to deal with the unbearable struggle entailed in every aspect of the fabric of the societies we have created. Humans weren’t ready to face the ramifications of being primal beings in technologically evolved worlds. Despite the fact that living conditions keep improving and wellness indexes keep rising, psychologically, humans aren’t doing well. Many philosophers and psychologists have attempted to shed light on the ways to deal with predicament, with Jung being the one that has offered the most intriguing one: Every person has a shadow that is comprised of the darkest facets of one’s character, and the way to battle and eventually control the shadow is to encourage the emergence of the heroic element within our psyche. 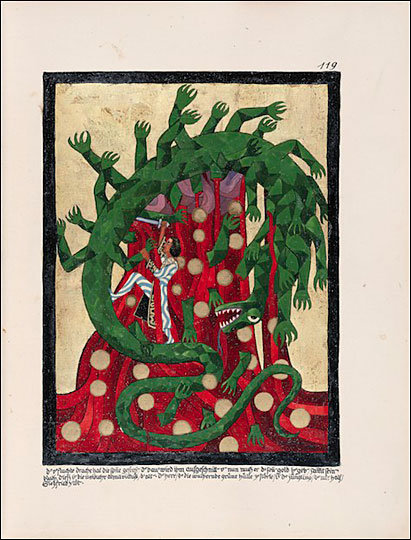 This image is from “The Red Book.” The hero who slays the dragon.

Unfortunately, not all of us can embrace the heroic aspect of our personality and, thus, we end up in a perennial state of struggle and grievance.

As you can imagine, it takes a combination of courage, emotional resilience and tenacity to be ready to navigate within this complex construction that we have assembled.

And the interesting part is that due to entropy and due to our proclivity towards innovation, complexity increases exponentially.

There is no way to avoid that and, for better or for worse, the best idea is to make peace with complexity in order to alleviate the frustration that it causes.

Here, I want to pause for a second and devote some sentences to the proper analysis of the term complexity.

The word complexity originates from the word complex, which means “composed of interconnected parts.” The reason I use the etymology of the word complex is to allow awareness to grow through understanding. I have always been a huge proponent of the systems thinking philosophy and one of my strongest beliefs has always been that confusion is a result of a lack of integration of parts within thinking systems.

We become confused because something is missing, or because something doesn’t feel right. The composition of interconnected parts that gives rise to complexity is not in tune with our awareness and, as a result, the melody of our world becomes distorted.

Our role is to become maestros of our part of the world and orchestrate the right composition through an elaborate process of wise selection of distinct elements.

When the composition becomes too vast, it feels like a mish-mash of chaotic elements and we end up floating in an ocean of far-fetched possibilities and opportunities.

Nobody likes to float aimlessly.

Nobody likes to feel lost.

WHAT TO DO WITH MY LIFE?

This somewhat lengthy but necessary introduction served as a prelude to the hefty question: “what to do with my life.”

This is a question so common, but at the same time so potent, that I don’t really know how to handle it whenever I need to face it.

It is strongly related to complexity and one cannot go about answering it without showcasing a rather basic understanding of how complexity affects almost every decision we have to make.

The “what to do with my life” question arises usually when complexity has overwhelmed the individual to such a degree that decision making becomes quite arduous, even for the simplest events in life.

The amount of external stimuli that increases exponentially through technology and through social networks, increases our possibilities and also our desires.

When we are interconnected with so many agents around the world, we feel that we want everything, even if we don’t really possess the capacity to imagine what everything would feel like.

I guess that’s why everyone is so enamored with the idea of parallel universes. We want so many things that only multiple interconnected versions of ourselves can offer that luxury.

In this perilous landscape, most of us fail to recognize one paramount detail about human nature: We are quite fallible creatures and it is this fallibility that we need to reduce in order to make our experience more tolerable and eventually come up with sagacious decisions when it comes to what to do with our lives.

WHAT TO DO WITH MY LIFE?

In this current point in time, two seem to be the most pertinent solutions to our issue: To pick our battles wisely and to embrace slowness.

Because struggle in itself is a very abstract notion.

Struggle doesn’t commence organically. It manifests itself via interaction and conflict with entities that don’t share the same interests, needs and belief systems.

Every goal you have, every process you try to put in place, every dream you want to materialize is susceptible to hurdles and unpredictable events  (or black swans as Nassim Taleb likes to call them).

The world feels like a huge battlefield and you need to be ready not to just fight, but to fight the right battles.

It is a fundamental principle of strategic warfare that each strategist needs to know their strengths and weaknesses in order to understand their capacity to win. But winning is not just related to fighting, but also knowing when to fight and whom to fight.

When people embark on endeavors nowadays, most of the time, they do so without properly evaluating their strategy.

They ask the question “what to do with my life” and they haven’t even taken baby steps towards cultivating more self-awareness and realizing what they are capable of.

I know people that want elusive things and keep fantasizing about them week after week, month after month, year after year, yet nothing happens. When you create fantasies about future events in your life that keep remaining fantasies, you start to lose touch with reality and you just bolster the delusional aspect of your world.

When I meet such people, I tentatively ask them: Have you prepared for the battles that you have to face?

The look on their face resembles an elegant mixture of confusion, unpreparedness, and embarrassment.

Then, I become more adamant and I tell them: Don’t ask me “what to do with my life.” Just pick your battles and pick them wisely.

The French philosopher Alain Badiou introduced, back in 1988 in his Magnus opus “Being and Event,” the philosophical notion of the term event. 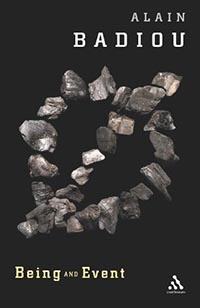 According to Badiou, an event is an unpredictable break in our everyday worlds that opens new possibilities.

What an event does is that it serves as a rapture in being through which the individual finds realization and reconciliation with truth. In order, however, for this rapture to manifest itself and have an impact on the constitution of the individual, being there is not enough. The individual needs to achieve oneness with the event itself.

This philosophy accounts for all sorts of events, but the way I interpret it is that it serves as an allusion to depth and slowness.

Notorious physicist and philosopher Richard Feynman used to say that “everything can become interesting if you go deep enough.”

That kind of thinking and way of life can’t emerge organically in the fast-paced world we have created.

It requires taking a step back and realizing that the only way to enact control over the processes that we decide to internalize is to slow down and take our time, even if the whole world tells us otherwise.

Through slowness and depth emerges a new way of being. One where the notion of time and experience is re-engineered through the prism of meticulous introspection and observation of our existence.

Not necessarily one that leads to over-analysis and results in further paralysis, but one where slow thought creates its own time and place and hedges the individual from most calamities that mindless living can beget.

With slowness and depth, one can be always ready and use whatever tools are in place at any given time.

Italians have a name for this: arrangiarsi – more than ‘making do’ or ‘getting by’, it is the art of improvisation, a way of using the resources at hand to forge solutions.

With such a mindset, you no longer need to ask “what to do with my life.” You are just ready to “do” whatever life throws at you.

Stop Being Boring – Become The Most Interesting Man
Alpha Male Traits: What They Are And How To Develop Them